1.Please introduce yourself
We are Al Bird and Tricia Duffy - otherwise known as Duffy & Bird
2. How did you get into music?
We’ve both been playing music and singing for our whole lives in one capacity or another.  Al was in the National Youth Orchestra in Wales as a child and Tricia has always sung, in choirs, on cruise ships and even in a musical at one stage.
3. What instruments do you play?
Al plays the piano, violin, French horn, guitar, bass pretty well and can generally pick up most string instruments and get a decent noise out of them!  Tricia plays the guitar, and played the flute and piano as a child.
4. Who are your influences?
We take influence from a huge array of musical styles, we are both massive fans of classical music, opera, jazz, rock and of course Americana and folk.  Tricia gets a lot of inspiration from singer songwriters like Gretchen Peters and Mary Gauthier, and she loves Sheryl Crow!  Al is influenced by thoughtful musicianship and loves rock and metal.  You can hear a lot of rock influence in some of our songs.  We both enjoy the juxtaposition of fluid vocals with very precise guitar parts.
5. Tell us about your latest release
'SPIRIT LEVEL' 5 track EP is out now 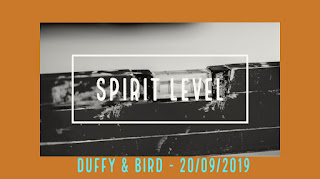 6. Whats your songwriting process?
Tricia usually starts with a lyric or an idea and builds a basic structure, melody and she usually creates basic harmonics.  All her ideas and WIP are storied in a file called “The Birdy Selector”, as we don’t live in the same city, Al then dips into the file and gives a thumbs up to the stuff he thinks would work for the duo.  We then work on expanding the parts, hooks and arrangements separately and together when we can, until we have something we’re happy with.  We then usually like to take it out to an open mic to try it out before we settle on what we’re going to record.
7. Which musician/ artist would you most like to collaborate with & why?
No idea!
8. If you were on a desert island what 3 musical gear would you take?
Tricia would take her beloved mic and her Martin Guitar.  Al would take a Banjo, because he has always wanted to learn and a Yamaha DX7 so he could learn how to do FM synth (80s) programming. He would also probably make his own instrument out of what every he could find on the island!
9. Where can fans find your music (links etc)?
I would like to say a huge thank you to DUFFY & BIRD for kindly taking part in this weeks 'Featured Artist Of The Week' 😃😃
Law